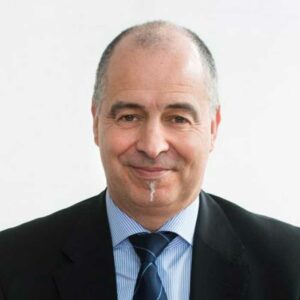 Jean-Pierre Chalus is the Chairman of the Board of Directors at Guadeloupe Port Caraïbes. He has been unanimously elected President of the French Ports’ Union (UPF) at the Board meeting on November 05th, 2020.

Jean-Pierre Chalus is a General Engineer of Bridges, Waters and Forests. He previously held the position of Executive Delegate at the Union of French Ports from January 2019 to June 2020, and Chairman of the Board of the Grand Port Maritime of Nantes Saint-Nazaire from February 2010 to December 2018. Born in 1965, he grew up in Puy-de-Dôme, and held several positions in the equipment units of the administrative jurisdictions of Oise, Rhône, Haute-Savoie and Vaucluse.

In 2003, he served at the Société des Autoroutes du Sud de la France (Society of Motorways of the South of France). In 2006, he set up the Massif Central Interdepartmental Roads Department before taking over, two years later, the head of the Grand Port Maritime of La Rochelle (GPMLR).